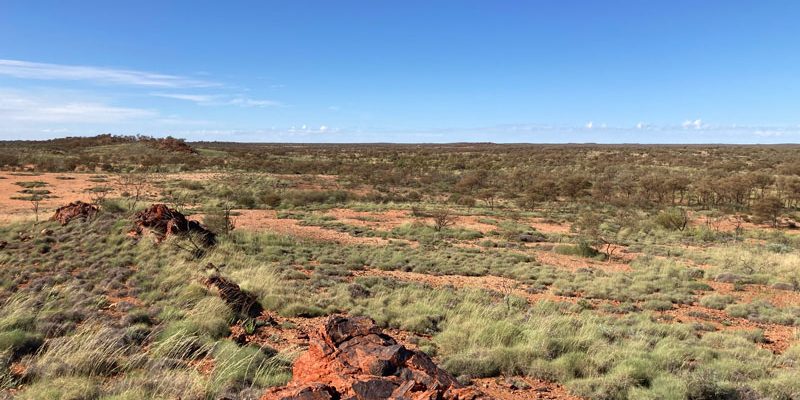 The Sylvania Project is a compilation of seven granted exploration licences and twelve exploration licence applications (which includes 3 tenements subject to a 90/10 JV and two tenements pegged by DCX and not the subject of the acquisition that cover a total of 2,247km2 located in the Pilbara Region of Western Australia and are centred approximately 50km southwest of the giant Iron Ore hub of Newman (Figure 1). Importantly, the Sylvania Project’s proximity to Newman and having both a major bitumen highway and gas pipeline adjacent to and within the tenure, provide excellent baseline infrastructure options for future project development.

In addition, the Sylvania Project is situated immediately to the west (approximately 60km) of one of Western Australia’s newest, large scale gold mine developments operated by Capricorn Metals Ltd at Karlawinda. The Karlawinda Project contains a Mineral Resource estimate of 2.15Moz @ 0.8 g/t Au and is set to pour its first gold in 2021.

Three major geological units are interpreted to exist within the Sylvania Project area, Archaean Greenstones belonging to both the Pilbara Craton and the Fortescue Group and also meta-sediments and volcanics attributed to the Proterozoic aged Wyloo Group within the Ashburton Basin. Importantly, all these units are known to host significant gold deposits, outside the Sylvania Project tenure, with the Karlawinda Project (ASX:CMM, Mineral Resource of 2.15Moz @ 0.8 g/t Au) hosted in the Pilbara Craton greenstones, Paulsens (ASX:NST, production figures plus Total Resource of 1.12Moz @ 5.3 g/t Au) within the Fortescue Group and the Ashburton Project (ASX:KZR, production figures plus Total Resource 2.0Moz @ 2.6 g/t Au) hosted by the younger Proterozoic Wyloo Group (for clarity, Lighthouse has no ownership of, or other interest in, those projects). Proterozoic aged volcanic and sedimentary rocks within the Sylvania Project also host the significant Prairie Downs Zn + Pb 2012 JORC Resource (2.9Mt @ 4.9% Zn, 1.6% Pb and 15g/t Ag) located centrally within the Sylvania Project area (located on tenement applications subject to a joint venture between Lighthouse and Crest Investment Group 3 Limited, in which Lighthouse currently has a 0% interest but is farming-in to a 90% interest).

The mineralisation styles and ages for mineralisation vary across these three main gold deposits and provide multiple targeting opportunities for DCX within the Sylvania Project bounds.

Recent, publicly available data from work completed by the Geological Survey of Western Australia (GSWA), which included a deep seismic traverse across the major structural boundary between the Yilgarn and Pilbara cratons, has shown the importance of two major fault structures (Baring Downs and Nanjilgardy Faults). These faults may act as “feeders” that tap deep into the upper mantle and potentially provide the main conduits for source fluids of the mineralisation at all three major gold deposits in the region. This work has also highlighted the role of regional thrusting and transverse or linking fault structures that may also play a key role in the development of, not only gold, but also base metal deposits in the region.

Exploration for gold in the region has generally been limited with only early-stage efforts conducted, mostly during the mid-1990’s. There has been little serious focus on gold and very few drillholes completed outside of the Prairie Downs Resource despite there being substantial evidence for widespread gold mineralisation in the region.

DCX’s approach, as always, will be to undertake systematic exploration using the existing historic datasets as a base whilst building information layers as exploration progresses. A number of key target areas are represented in the historic literature where stream sediment surveys delineated numerous gold anomalies that require careful investigation. At the Carney, Spearhole and Brumby prospects (refer Figure 3), stream sediment surveys conducted historically have indicated gold prospectivity. The historical reporting (the compilation and interpretation of which is ongoing and incomplete) indicates the potential for widespread gold mineralisation which DCX aims to uncover. In addition, evidence for gold mineralisation exists at the Prairie Downs Prospect adjacent to the mineral resource and this demonstrably mineralised area (mostly base metals discovered to date) will be investigated in detail, underpinned by an alternate epithermal mineralisation model for the current base metals resource.

A regional surface geochemical programme will be rolled out, immediately post completion, coupled with detailed geological mapping and airborne geophysics as required.

Whilst two mineral resources, Prairie Downs (Zinc and Lead) and Spearhole (Detrital Channel Iron) are present on the Sylvania Project, and are discussed in detail below, they will not be the immediate focus of exploration efforts.

The resource is located within a sequence of sediments (Prairie Downs Formation) and greenstones (the Fortescue Group) which onlap the granitic Sylvania Dome. The hanging wall rocks are mafic volcanics and the footwall lithologies range from mafic lavas, mafic pyroclastics and cherty metasediments (Jeffery, 1998).

The major regional feature is the Prairie Downs Fault (PDF) zone, a 200m wide fault zone that is visible for over 20km in the Crest JV tenements. The PDF is interpreted as a large regional fault, which taps deeply into the basement sequences but does not exhibit major displacement of the underlying Hammersley sequence (Askins, 1998).

The Spearhole detrital channel iron resource is situated within the Crest JV Tenements (application tenements) and occurs from, at or near surface, with consistent grades and thickness and has a historical 2004 JORC Code defined Inferred Mineral Resource of 1,400Mt @ 23.5% Fe, as announced by Dynasty Metals Australia Limited (ASX:DMA) on 27 October 2010 entitled “Dynasty triples JORC Resource to 1.4 Billion Tonnes”, available on the ASX website. It is located approximately 28km north of the Prairie Downs Zn + Pb Mineral Resource and comprises iron rich detritus that has been reworked by surface processes within a buried braided river system, oriented NW-SE, housing extensive iron rich material with pockets of higher-grade material. Areas closer to the Brockman and Marra Mamba formation to the north west are less sorted and ferruginous material contains a lower percentage of silica as this material has not been subjected to as much silicification through precipitation. Further down the drainage system the material contains a higher fraction of rounded fragmental material.

The DiscovEx competent person views the estimate to be reliable based on information obtained through public records. All previous work that the resource relies upon was completed by Dynasty Metals Australia Limited between 2009 and 2011 and includes the completion of 196 RC holes for a total of 5,929m. Drill hole spacing was 400 x 200m and 400 x 100m. A further 37 sonic drill holes were completed for a total of 1,085m for the purposes of providing material for the calculation of bulk density data. Samples were taken via an 8” bit allowing the collection of samples weighing ~40-60kg per metre. This allowed for the collection of at least 6 tonnes of sample from each location area, the amount recommended by the laboratory (Nagrom) to be sufficient for representative beneficiation and bulk density testing. Beneficiation samples were weighed, logged and photographed, before being bagged and prepared for shipping to the laboratory. Bulk density samples of known volume were weighed to the nearest 50g using industrial scales. The resultant bulk density readings showed some variability around a trendline that could be determined using average bulk densities within ranges. The most conservative trend was used to calculate theoretical bulk density values across the resource.